Sir Roger Moore, who has died aged 89, brought a lighter touch to the role of James Bond, the role for which he was most famous.

Out went the harder, crueller edge of Sean Connery's 007 to be succeeded by sardonic humour and the inevitable raised eyebrow.

He eventually became the longest-serving actor in the role, his seven Bond films becoming the most commercially successful of the franchise.

His tenure in the role also showcased an array of implausible gadgets and a host of new characters, designed to flesh out Ian Fleming's original plots.

Roger George Moore was born in Stockwell, south London on 14 October 1927, the son of a policeman.

At 15, he entered art college, and later became an apprentice at an animation studio, where it seems much fun was had at his expense.

"I was probably the lowliest in the entire building," he said. "They sent me on errands for things like tins of sprocket holes, and the guy in stores would say he didn't have any - and would rainbow paint do instead?"

Sir Roger was sacked for incompetence, but soon had a stroke of luck. His father, by now a detective sergeant, was called to investigate a robbery at the home of the film director, Brian Desmond Hurst.

DS Moore managed to effect an introduction that led to his son being hired as an extra for the epic, Caesar and Cleopatra.

Hurst paid for Sir Roger to study at the Royal Academy of Dramatic Art in London, before a spell of National Service with the Army where he rose to the rank of captain.

On his return to the theatre, he found acting roles hard to come by but his well-toned physique meant he was in demand as a model. One of his engagements was playing the doctor in Woman's Own medical features.

He also appeared, suitably attired in a sweater, on a number of knitting patterns, prompting at least one wag to christen him the Big Knit.

And in 1953, his looks and his minor roles in theatre and television plays impressed an MGM talent scout and Sir Roger set off for America.

Married at 17 to a fellow Rada student, Doorn Van Steyn, he was by now living with the singer Dorothy Squires, 12 years his senior, who soon became his second wife at a ceremony in New Jersey.

While Squires was popular in Britain, Sir Roger was rubbing shoulders with stars in the States, making his film debut with Elizabeth Taylor in The Last Time I Saw Paris and playing Lana Turner's leading man in Diane.

But it was through television that he first made his mark, as the dashing hero Ivanhoe in a 1950s series that had only a tentative connection with Sir Walter Scott's original novel.

He followed that with the lead role in an American TV series The Alaskans. It was not a great success. Despite being set in Alaska, it was filmed on a hot Hollywood set with the cast dressed up in furs. Moore found the filming difficult and an affair with actress Dorothy Provine did nothing to relieve the pressure.

He also appeared in the successful Western series Maverick, where he had the role of Beau Maverick, supposedly the English cousin of the lead character Brett, played by James Garner.

Ironically Sir Sean Connery had also tested for the part but turned it down.

Sir Roger's big breakthrough came in 1962 when the impresario Lew Grade cast him as the dashing Simon Templar aka The Saint, in a television adaptation of the Leslie Charteris stories.

The series, which ran for seven years, made Sir Roger a star on both sides of the Atlantic. Many of the Saint's characteristics, the easygoing manner, mocking eyebrow and ability to successfully charm every passing female, would later be incorporated into his role as James Bond.

In 1971 he teamed up with Tony Curtis in the TV series The Persuaders, as one of two wise-cracking millionaire playboys who floated around the fleshpots of the globe as a pair of freelance secret agents.

The success of the series owed a lot to the contrast of the rough-hewn New Yorker Danny Wilde, played by Curtis, and Sir Roger's suave Lord Brett Sinclair.

Sir Roger always denied that he had been considered as James Bond when the franchise launched in 1962 and was only aware of interest in him when Sir Sean announced, in 1966, that he would no longer play the role.

There was a long wait. George Lazenby was cast in the 1969 film On Her Majesty's Secret Service and Sir Sean was tempted back with an offer of £1.5m, a huge sum in those days, to make Diamonds Are Forever.

It really was the last appearance for Sir Sean and Sir Roger finally picked up the Walther PPK in 1973 for Live and Let Die.

He went on to make six more films, including The Spy Who Loved Me and Octopussy, before bowing out of the role at the age of 57 with A View to a Kill. It was his last film appearance for five years.

Sir Roger had some success in films such as Shout at the Devil, The Wild Geese and North Sea Hijack, but many of the newspaper headlines after he retired as Bond were about his life off screen.

In 1963, he became a father, when his partner, Luisa Mattioli, had a daughter, but it was to be another five years before Dorothy Squires agreed to give Sir Roger a divorce.

He married Luisa and they had two sons, but after 38 years, Sir Roger left her and they were divorced. He married his fourth wife, Kiki Tholstrup, in March 2002.

Sir Roger recovered from an operation for prostate cancer in 1993 and said he had led "an extraordinarily lucky, charmed life".

He had homes in Switzerland and Monte Carlo, but devoted much of his time to travelling the globe as a roving ambassador for the United Nations children's organisation Unicef, a role prompted by the scenes of child poverty he had witnessed in India while filming Octopussy.

He took up the position at the request of his friend and predecessor, Audrey Hepburn. His work was recognised by a CBE in 1998 and he was knighted in 2003.

Throughout his life Sir Roger cut a suave figure, always immaculately dressed. In 2015 he was awarded the accolade of one of GQ magazine's best-dressed men.

He was a lifelong supporter of the Conservative Party, giving his backing to David Cameron in 2011 when the prime minister faced criticism over his policy on the EU.

Despite his other work and achievements, Roger Moore never managed to quite shrug off the mantle of 007.

"Of course I do not regret the Bond days," he once remarked. "I regret that sadly heroes in general are depicted with guns in their hands, and to tell the truth I have always hated guns and what they represent." 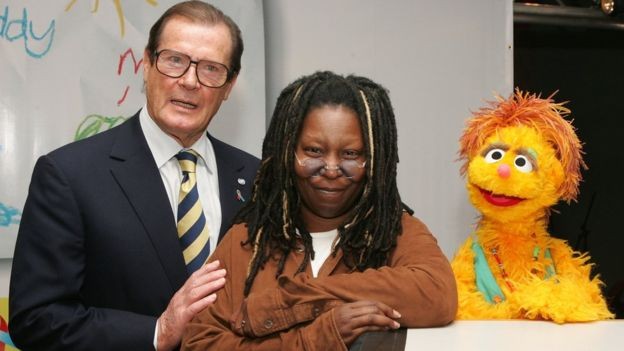 Sir Roger was an active supporter of the global children's charity Unicef and got together with US comedian Whoopi Goldberg - and a muppet - in 2005 to front a campaign highlighting the impact of Aids and HIV on children. 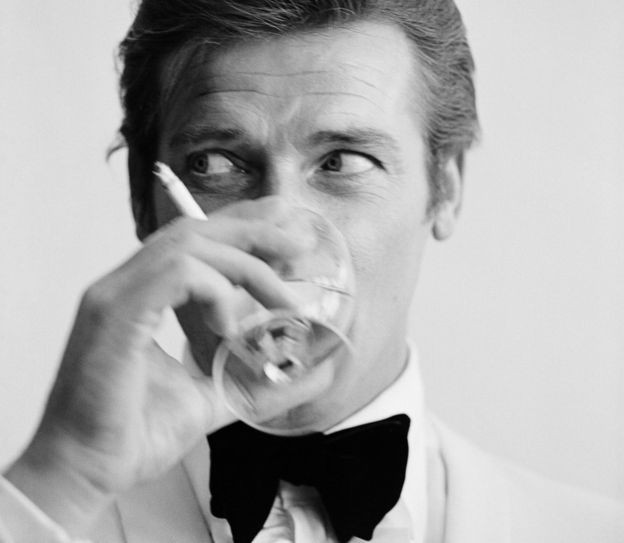 From 1962 to 1969, Sir Roger became one of the UK's most popular TV stars playing the Saint, aka the debonair Simon Templar, a conman whose mission was stealing from the corrupt wealthy. 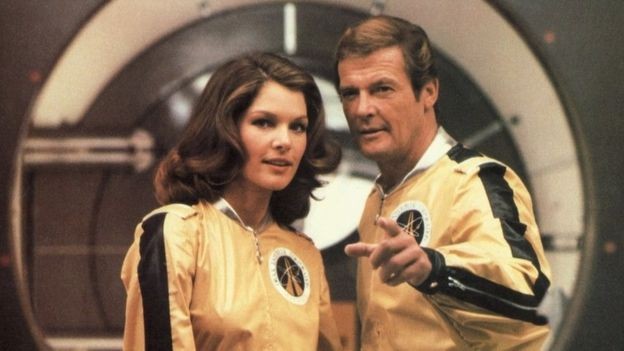 He brought a lighter touch to the role of James Bond 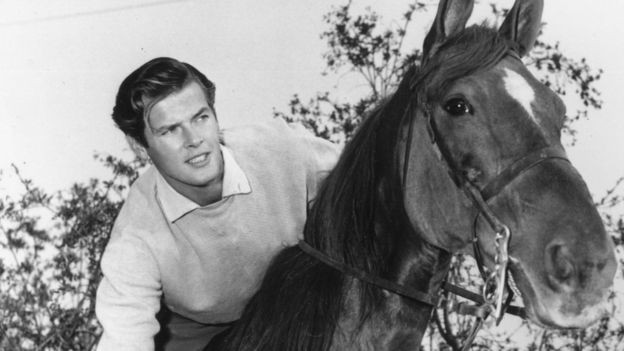 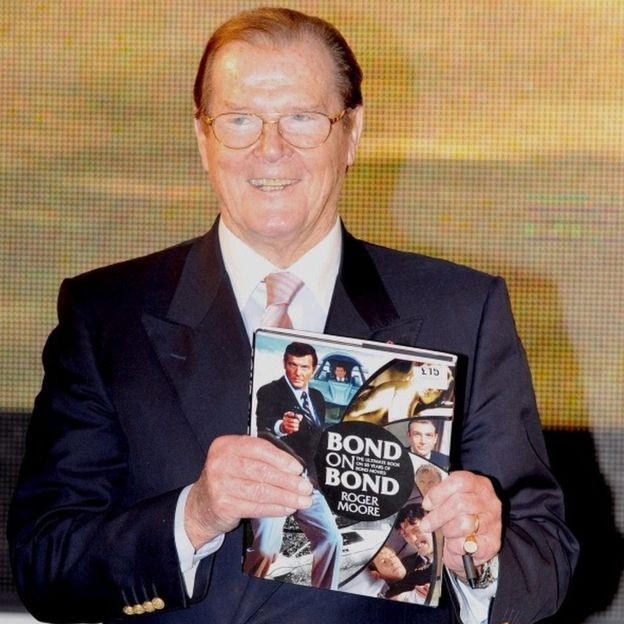 He would also remain associated with James Bond 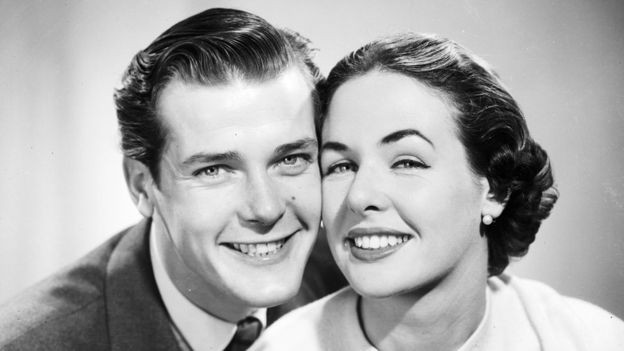 Here's a very young Roger, pictured in 1953 with Jennifer Haking, as he began his career as a model. 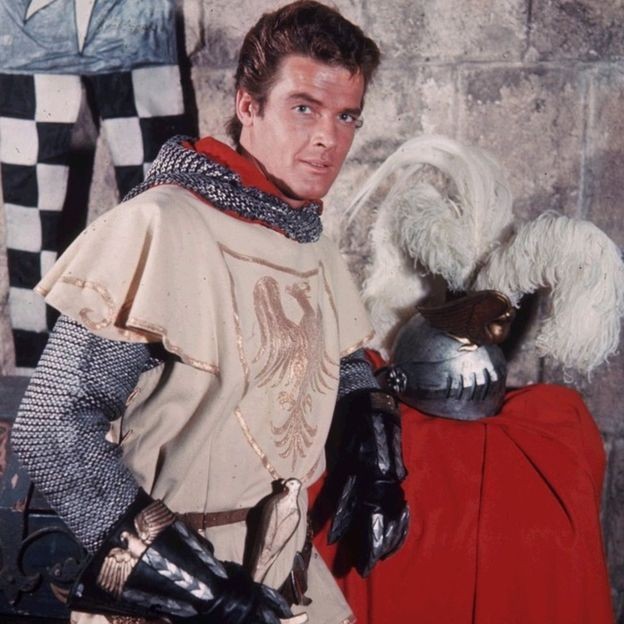 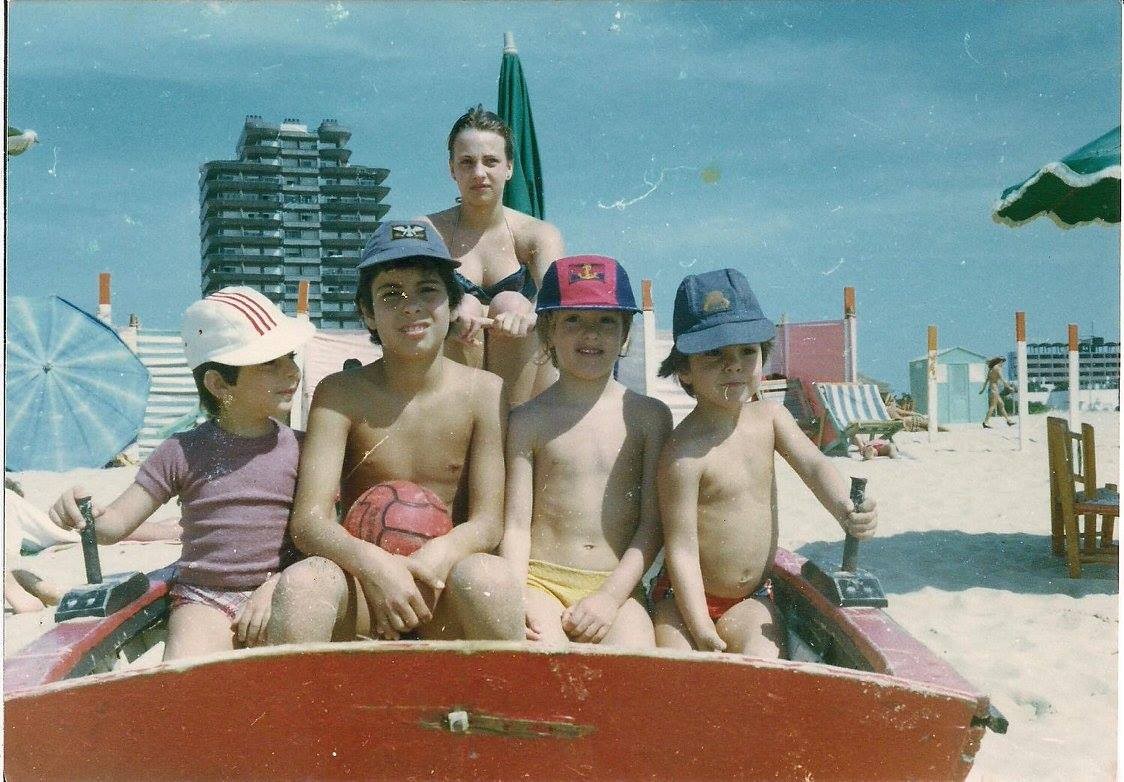 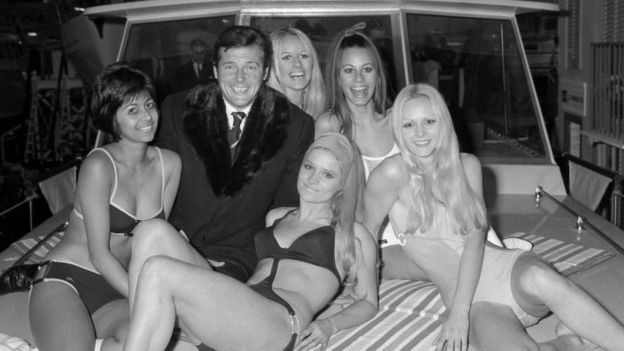 Riding high on his popularity on and off screen, Sir Roger enjoys a fun moment in the limelight at the London Boat Show in 1970. 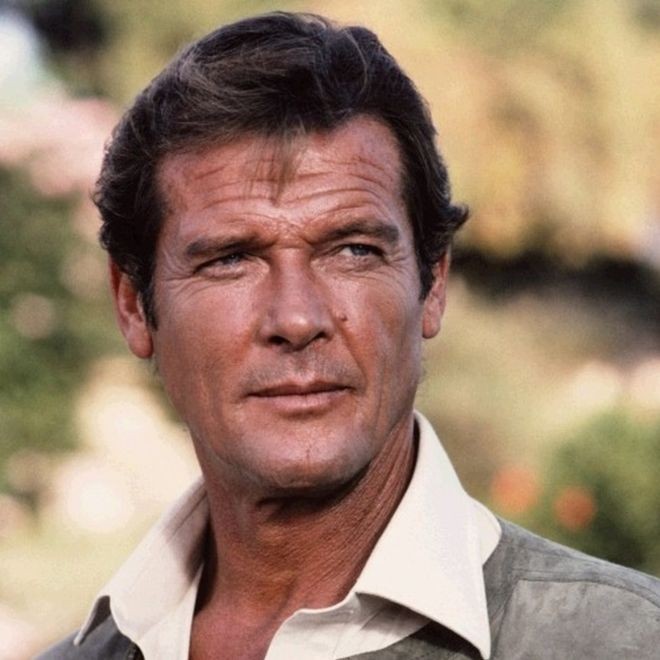 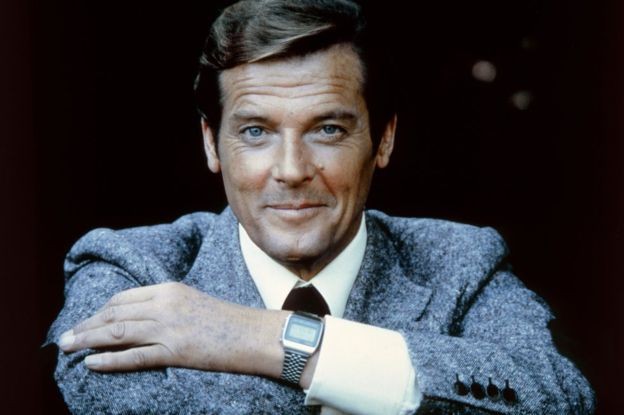 Sir Roger Moore rose to fame on the charm and good looks that accompanied his skill as an actor. 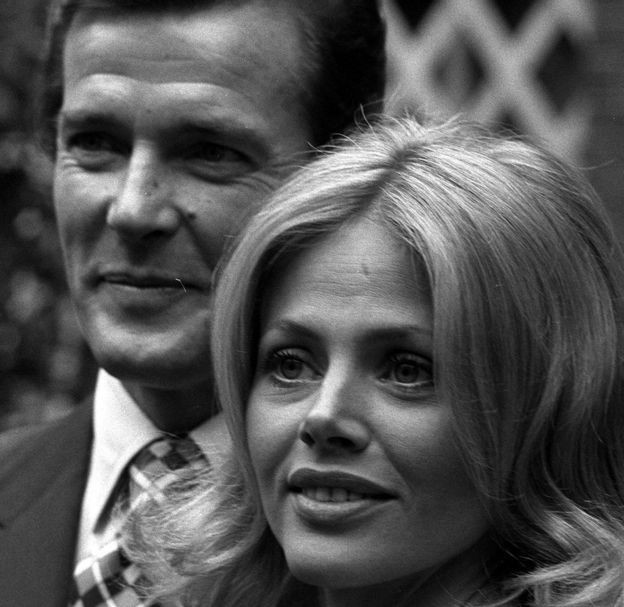 Sir Roger starred with Britt Ekland in the 1974 Bond movie the Man with the Golden Gun in which they faced by the evil Scaramanga, played by Sir Christopher Lee. The movie was one of seven 007 features with Sir Roger in the leading role. 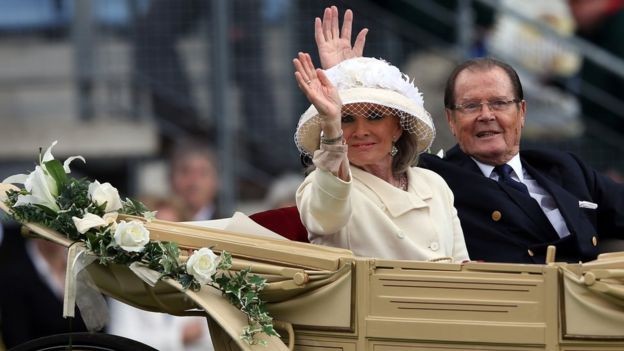 Sir Roger was an international star throughout his life and was guest of honour at a racing event in Germany with his last wife, Kristina Tholstrop, in 2013. 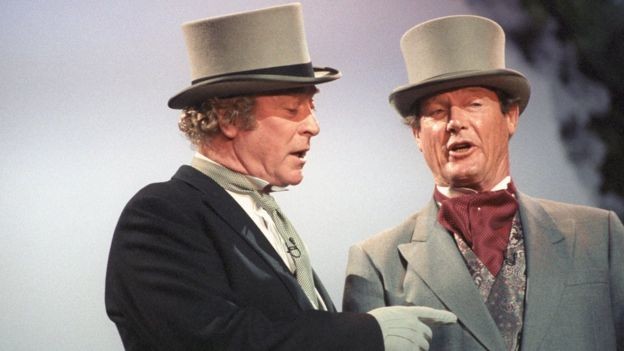 Sir Roger was invited to perform a sketch along with Sir Michael Caine at the London Palladium in honour of the Queen Mother's birthday in 1990. 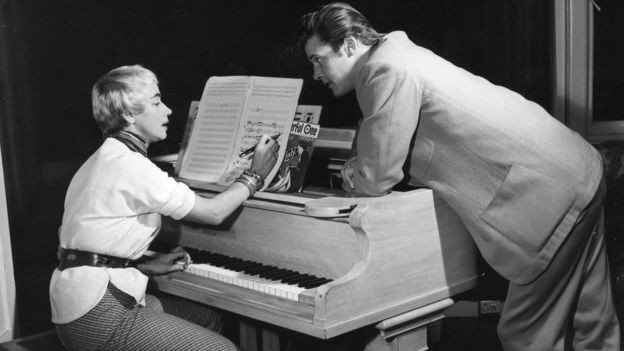 Sir Roger was married four times. His second wife was the acclaimed singer Dorothy Squires and they were together for 15 years. 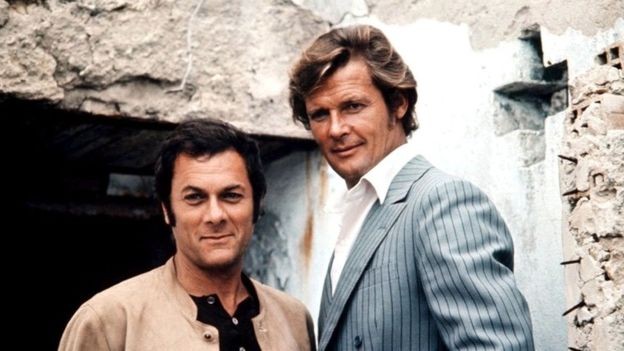 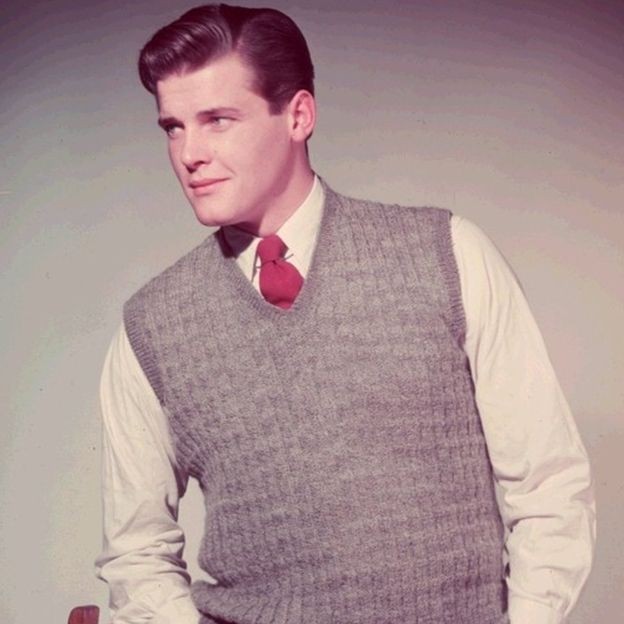 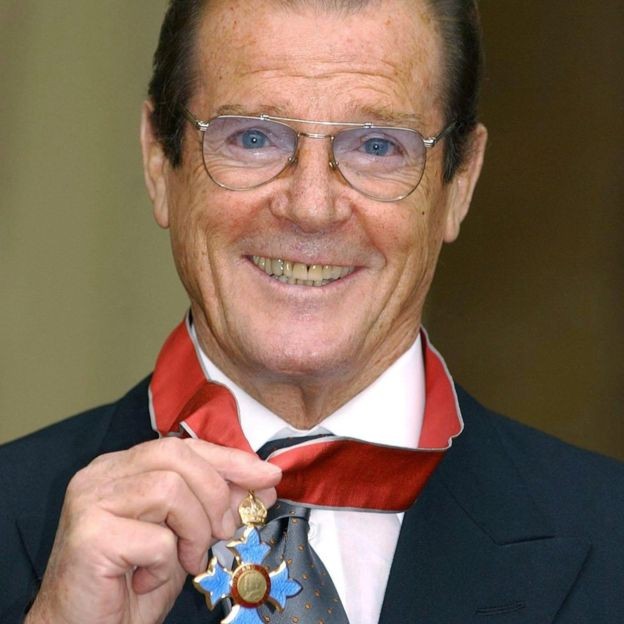 The actor received a knighthood for his charity work in 2003.